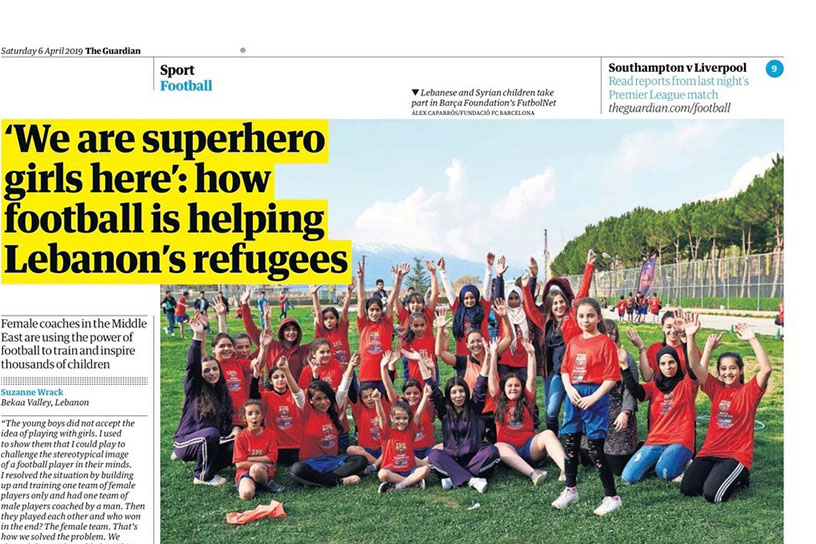 Titled ‘We are superhero girls here: how football is helping Lebanon’s refugees’, specialist writer on women’s football, Suzanne Wrack, has used an article in leading British daily The Guardian to explain how the FutbolNet programme is fostering integration and such values as respect and tolerance. The article also describes the effort being made to train coaches, thereby facilitating the inclusion of girls (who already represent 30% of the total number of participants) in the activities run on the programme.

Wrack, who travelled with the Barça Foundation to the Bekaa Valley, near the Syrian border, also cites a number of different testimonials. Among them, FutbolNet coach Karime Akrouche says how: “The young boys did not accept the idea of playing with girls. I used to show them that I could play to challenge the stereotypical image of a football player in their minds. I resolved the situation by building up and training one team of female players only and had one team of male players coached by a man. Then they played each other and who won in the end? The female team. That’s how we solved the problem. We showed them girls could play. This helped them to start to accept girls”.

The article also highlights how since 2016 more than 1,300 children have been able to attend in the sessions organised in different places in the valley. Of these, 70% are refugees. Likewise, FutbolNet's methodology has also been incorporated into the sports curricula at different schools in the country, reaching more than 6,000 children, of which 75% are of Lebanese origin and 25% of Syrian origin.

40% of FutbolNet coaches in the region are women who use the methodology with the girls in their groups. For some of them, this is their only chance to participate in sports activities. The programme is helping to normalise the role of women in training and leadership in a territory where there are still major barriers in terms of equality and the presence of women in sports.

Since 2016, the Barça Foundation has been working in the Bekaa Valley with its FutbolNet methodology, the social and educational program aimed at promoting emotional well-being and the inclusion of the most vulnerable young people. Implementation of the programme helps to integrate refugees with the autochthonous Lebanese population. The program is also being run in Greece and southern Italy.